Naked  Mole Rat: these strange fellas live in sub-Saharan Africa. They’re unusual little mammals because they live in colonies with a queen/worker structure more like insects than other rats or mice. National Geographic describes them as “rodents whose hairless, tubular, wrinkled bodies makes them appear a bit like a tiny walrus—or perhaps a bratwurst with teeth.” 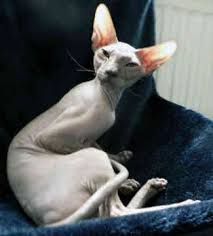 Peterbald cat: According to cat handbooks, they’re intelligent, elegant, active cats known for being affectionate, playful and bold…. shouldn’t that be bald?

Anyway, the common characteristic is that both these creatures are almost entirely hairless (they do both seem to have whiskers though).  The mole rat evolved this way, the Peterbald had a helping hand from the Russians.  I’m wondering whether crossing these two results in an elegant, intelligent bratwurst with teeth? Or an affectionate, playful, bold tiny walrus?  It’s looking very likely I might be joining their ranks thanks to FEC1 so if I have to be like them, which one would I be?  Intelligent bratwurst with teeth sounds good.

I think the crazy snail cold cap (it looks like a snail complete with psychedelic shell) has helped a bit. My pillow hasn’t turned into Cousin It overnight… yet. But 12 days on from my first treatment my hair is definitely detaching itself from me.  Fortunately I prepared for this eventuality by having it cut in increasingly short styles over the last couple of months. I wasn’t brave enough to go for the full GI Jane look but it’s not so far from that already.

Hair loss is a strange event.  It’s not so much losing it that’s upsetting, it’s more the fact that once it’s gone the Cancer TM is there for all to see.  That’s when staring, pitying glances or scaring small children begins. To be fair most small kids are unphased by the way other people look, it’s only when they start perceiving ‘normal’ that ‘different’ becomes a problem.  At least we’re heading into winter so if I’m wearing hats all the time I won’t look quite as out-of-place (and it’ll keep my head warm).  I’ve decided if my hair does insist on coming out I’ll get the clippers on it because looking like a fox with mange isn’t exactly catwalk chic. Then again, what do I know? 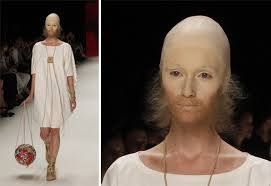