My son has introduced me to a new iPad game called “Dumb Ways To Die.” He warned that it’s both silly and addictive.  I think he’s probably right.

As someone living with the ongoing threat of cancer I’d already thought of some dumb ways to die. For example metastasis, febrile neutropenia, allergic reaction to Herceptin, complications arising during chemotherapy, congestive heart failure due to Herceptin and anthracyclines, becoming depressed enough to jump from something high up – multi-story car park, suspension bridge, cliff edge etc., failing to awaken from surgery, embolism, organ failure or haemorrhage.  There’s even development of a second kind of cancer, typically some form of leukaemia, as a result of the chemo used to treat the first… That really would be ironic. As you can see, I have quite an active imagination when it comes to facing the  challenges that cancer and its treatment make all too real.

The challenge in the Dumb Ways to Die game is to keep your characters alive. Not dissimilar to the paths you have to take when faced with a cancer diagnosis. Unlike death caused by cancer, the Dumb Ways to die folks have some novel ways of shaking off their mortal coil. Some need to avoid oncoming trains, some need to keep their aircraft flying, another needs to put mustard on a hotdog so his hungry pet rattlesnake eats that instead of biting him on the eye (ouch!) and another has to be protected from angry wasps.  It’s a very silly game and so far I’m not very good at it although I consistently manage to avoid opening the door to a psychopath.  Being attacked by piranhas is another story, especially if there are more than half a dozen. 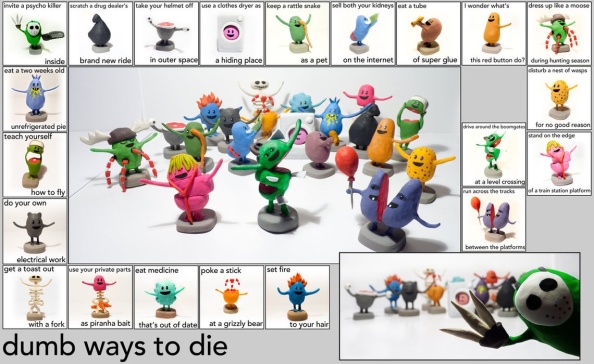 A psychopath was one of the few things I didn’t imagine killing me when I embarked on my tango with cancer. On reflection I was a little remiss to neglect that option because although I didn’t run into one of those I did encounter a sociopath. The experience was far from pleasant. Unfortunately sociopaths can pass themselves off as normal members of society and often end up in positions of power because they use their charm and well-developed manipulation skills to fool others into giving them what they want.  Sociopaths have no real emotions, can lie shamelessly, do not feel guilt or remorse and will do whatever it takes to achieve their aims.  They are often described as narcissistic, grandiose, charming and authoritarian.

Fortunately I’m no longer impacted by the sociopath and can concentrate on getting my life back on track once my cancer treatment is finished.  I will always have some of the original dumb ways to die in the back of my mind – I think that’s probably unavoidable once you’ve been through the cancer experience and endured treatment. However, I can cross off chemotherapy related incidents as far as I’m aware, at least in the short-term.

I will also refrain from setting my hair on fire (its only just growing back), eating anything thats out of date and will fervently avoid leveraging toast out of the toaster with a fork in future. I don’t feel the need to add those options to my already extensive list of cancer-related dumb ways to die!