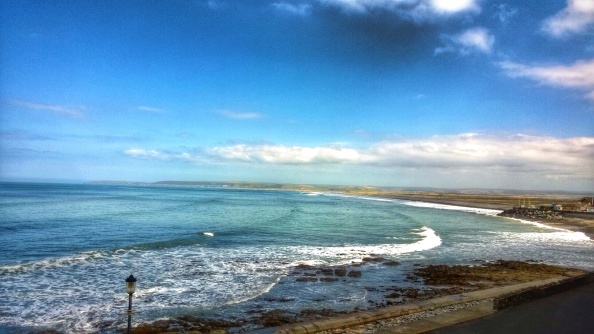 My trip along the Tarka Trail exceeded a few limits. It would’ve been easier to turn around at Instow but I didn’t because I inherited the never give up and always do your best genes. They’ve served me very well in my life to date and hopefully they’ll continue to do so.

The journey provided some valuable insight into what I’m physically capable of, how far I can push myself and what the consequences of over-exertion might mean. My philosophy on consequences is “so long as they’re survivable they’re manageable.” That’s not to say they aren’t painful as hell but I’m still here so it’s a case of working them through 🙂 .

I had to be very gentle with myself for a whole day and took more NSAID’s than I’d like to keep the pain in check. I have a strong aversion to drugs unless absolutely necessary and though I wanted to tough it out, I knew that would mean taking more than one day to recover.  I traded an extra day’s activity for  few pills; I’m not proud of that fact but it’s part of managing the consequences. Paying attention to the most tender spots highlighted the trouble points as right side: knuckles, wrist, elbow, knee, ankle, and left side: hip, elbow and knee. They’re the places that gave cause for concern when I was undergoing active treatment but there are no new hotspots which can only be a good thing.

The benefits of getting out there and exceeding a few limits by far outweighed the consequences. I saw some beautiful places that are inaccessible by road, spent a whole day outside in the fresh air and captured a few nice photos of snowy egrets, a curlew, some oyster catchers and possibly a snipe. I also saw a whole host of other wildlife including more dragonflies and butterflies than I’ve seen for ages, some brilliant pink sweet peas and pretty little vetches. I wasn’t confined to an office, a car or a house, didn’t need to watch the clock and could be as sociable (or not) as I liked.

Knowing our limits doesn’t mean we have to be constrained. Now I know how far is too far I can adjust accordingly – push up to the boundary and gradually try to extend it over time. I’m fairly sure with some ongoing effort, continued determination and the help of NSAID’s when required I’ll be able to go further and regain the stamina cancer treatment took away. Although it will be a small victory, when the day comes it will be a victory worth celebrating because the whole cancer thing wrought more havoc than can possibly be imagined.

It’s true that the effortless option has never really been my path of choice and as a result I’ve spent 40-odd years working my socks off. In doing so I learnt that without giving things a go, there’s no way to establish what might be possible. Life doesn’t always turn out exactly as we’d like yet we can still achieve more than might reasonably be expected if we give it a go and refuse to accept there are limits. I’m not going to enter myself for the New York marathon but I’m not being confined to the 100 meters either 🙂